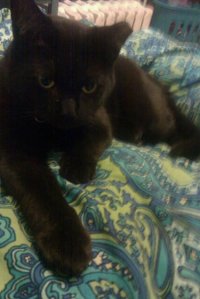 I went to the shelter yesterday to look, just to look, and saw him. It’s a great place: no cage and no kill, so all of the animals have plenty of space and plenty of toys and love. Quarantined in a room with just one other cat, he was sleeping on a large pillow. I went in with a volunteer and he was immediately a fan of me, friendly and curious. So I said, I’d like to see some other cats. But the other cats weren’t him.
They named him York. I think we’ll keep it.
He’s all black but his coat is full of random little white hairs. He’s probably about 14 pounds and when he stretches, his eyes peek up over my bed. He’s a bunch of cat without being too fat.
He’s about two, they think, based on his teeth, but they aren’t sure. He was a street cat until someone found him and decided he’d make a great pet. His tail must have been broken at some point, it bends right near the tip and sometimes he just wags the end of it. One of his ears has been cut too, that’s what they do when they neuter a street cat.
But of course, that’s not all. He has FIV, or in English, cat HIV/AIDs. Whereas his infection won’t ever lead to cat AIDs (sort of), he’ll have health problems later and could get sick very easily. And that’s why no one wanted to take him home and love him. And so of course, I did.
The staff was all so excited that I was taking him. They told me that he’s something of a celebrity around PAWS ( http://www.pawschicago.org). We joked last night about naming him “Philadelphia” or “Tom Hanks” after the movie, but it just didn’t fit. And I want to name him Salem or Binks, but they’re all just too melodramatic. His collar (oh he has the cutest collar) reads York, but maybe I’ll name him Hades just for fun.
Nah.
He’s too sweet to be a hell-cat. Instead of being shy and nervous when he got home, I opened the crate (he’s too big for a cat crate, I’m going to have to buy a small dog carrier) and he went right out. He loves under my bed (so much to squeeze around!) and my closet. Last night, he came and snuggled next to me for part of the night, so I’m excited about that. He found his litterbox and food right away. He looks really funny when he eats for some reason. He sort of throws his neck around and gulps.
This morning, as soon as I was out of my shower, he came and jumped on my bed and nuzzled me for a good five minutes. He loves the blanket that Mike got me for graduation (it’s a traveling blanket with two sides).
I know this is bad timing. I’m about to graduate from college. I don’t have a job. Hell, I don’t need a cat. But I saved him and I’m going to love him.
We call him “SpEd Cat” sometimes.  Because he’s special needs.
Also, don’t make jokes in a shelter about adopting a cat and then making cat soup. They may not think you’re very funny.