The first time I came across Gloria Anzaldúa’s Borderlands, I was 17 and a senior in high school. I hated it. Like, really hated it.

I came across Anzaldúa again during an exploration of feminist literature for a women’s studies class in college. I liked her a little better, but found her style of inserting snippets of Spanish into her writing annoyingly pretentious.

(This stems from an upper-level Shakespeare class I took the summer between my junior and senior years of college. On the first day, the professor asked us to go around the room and give an example of “fool.” When we got to the girl sitting next to me, she said smoothly, “I have a highbrow and a lowbrow example for you.” I rolled my eyes. I would later go on to hear the professor telling the girl that it was unnecessary [subtext: pretentious and douchey] to put so many French quotations in her papers.)

I have no idea why I initially disliked Anzaldúa so much. Her writing isn’t really pretentious.  It’s honest. It’s the product of her cultures, and her experiences, and her feelings. (After I post this, I’m going to find my box of file folders and dig through it to find notes on why I hated Borderlands so much the first time. I bet it’s a seriously silly reason.)

Her writings influenced the lesson that my AP English teacher taught about segmentation in the mind. I remember it as this: as the human brain learns new information, it attempts to categorize that information, and puts it into the boxes that it already has established. Woman. Dog. Boy. Adult. And so on. Each box exists as a separate container for information. 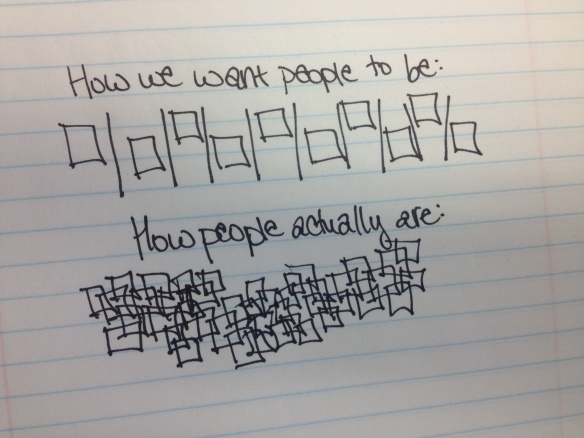 (I know what you’re thinking, and no, I’ve never been great with a straight line. I am also aware of the fact that I have the handwriting of an 8th grade girl. I was one once,  you know.)

The identity of a person doesn’t fit into just one box. An identity is a combination of boxes, all jumbled together to form a bigger picture of the whole.

Anzaldúa’s writing focuses on her lack of a concrete identity (belonging entirely to one box) since she is mixed-race and a lesbian, and therefore inhabits many boxes within many other boxes, hence the title Borderlands. Being both of those can get difficult, especially in a society that does not seem to value diversity.

As a college student, I was more receptive to her writing style, although I’m not sure that I was as gung-ho on her as I was on other authors (Judith Butler, I love you).

The idea of not fitting in entirely is not a foreign concept to most people. Granted, as a straight white chick, I will never quite understand the implications of being part of both racial and sexual orientation minorities, but the inability to truly identify as something concrete is something that I struggle with as I attempt to accept that I’ll never know who my birth father was and as I process the larger implications of being adopted as I enter adulthood (although the possibility of being part Vulcan or Russian or English or German or Elfish or Canadian is always exciting, I guess).

Anzaldúa definitely brought a different perspective to American feminist writing, which was (and still is) primarily driven by a very monochromatic subset of our society, and I think it’s really good to continue to acknowledge that even in feminism, minorities are under-represented and overlooked, and then work to change that.

Girldrive – which I highly recommend reading, highlights the importance of looking at feminism from outside academia – also brought my attention to the importance of identities for women, particularly as they navigate the various roles they identify with. (Are you white first? Or a woman first? Or a feminist first? Eventually, you have to accept that you’re a mass of all things all at once, even if people see and identify you as one thing or another immediately.)

Anzaldúa’s contribution was a giant one and as much as I hated Borderlands then (I have since come to respect both the author and her works, and sincerely appreciate being exposed to them earlier than most), I think it needs to remain an important part of our educational curriculum far into the future.

What sparked this? This article in Bitch.

If you read Bitch, you are likely at least somewhat familiar with Gloria Anzaldúa and her work with feminism, her beautiful writings, and her advocacy for women of color. She was a Chicana-Tejana-lesbian-feminist poet, theorist, and fiction writer, born September 26, 1942, in Raymondville, Texas. She passed away on May 15th, 2004, but still remains one of the most widely read, respected, and loved queer woman writers of color in history.

As someone who identifies as queer and mixed race, her work was bound to play a pivotal role in the way I construct and understand my identity, the way I live my life, and how I interact with others. I picked up a used copy ofBorderlands/La Frontera (the first edition) when I was 18 years old. Her semi-autobiographical collection of memoir and poetry was older than me, and I had no idea of the gravity of the impact it would have, but I began reading it, slowly–swallowing her words, and digesting them into my being. It was a lot to take in. Quickly, she helped me realize that the comfort I thought I found in labels was simply an assimilationist value I had adopted, not for myself, but for the comfort of others. I never knew how to answer the question, “so, what are you?” It was what I had been grappling with for my entire life; I was living between worlds–the borderlands. I am not either or, but rather, on the edges of all, in an unstable, and ever-changing terrain, “nepantla”–a Nahuatl word for the in-between spaces, where the boundaries are unclear, and we are constantly in transition. I can use ambiguity as resistance, and realize that I will not, and never will, fit so neatly into the boxes left out for me, for that would be the death of the borderlands, and the death of the identities I hold.

It is the chapter “Movimientos de rebeldia y las culturas que traicionan,” which roughly translates to “movements of rebellion and the cultures they betray,” that I carry closest to my heart. I have read those 10 pages more times than I can count. In this chapter, Anzaldúa notes “homophobia,” and not in the way you might think. She means the fear of going home, the fear of abandonment, by the mother, the culture, for being “unacceptable, faulty, damaged.” And to avoid rejection, we conform to values of “the culture,” while pushing what we are taught to understand as unacceptable into the periphery of our vision–the shadows. We’ve internalized our oppressions, thus, creating what Anzaldúa aptly named the Shadow-Beast. We fear that the beast will break free, and that our truths will show. Though, it is possible to come to terms with the Shadow-Beast, to see her as kind, and tender, as a being that wants to be released not in the name of destruction but to uncover the lies we’ve let inhabit our bodies, in order to come into our true selves, to resist imposed ideals, and to not be simply tolerated, but loved, and understood. It is a process, and most often, a struggle of pain, and melancholia. I am on a constant search for home, language, and kinship, and I was able to find a basis for all of this in Anzaldúa’s words.

Needless to say, this book has impacted my life in a way that I can barely scrape with a short blog post. I will revisit this text for years to come, it will live with me, it will understand me, and I will continue to discover what it means to live in such a transient space.

Aunt Lute, a nonprofit press focused on bringing the voices of women—particularly queer women and women of color—to publication, is celebrating its 30th year, as well as the 25th anniversary of Anzaldúa’sBorderlands/La Frontera. For the 25th anniversary of the book, Aunt Lute is looking to publish a fourth edition, but they cannot do so without your help. So, please, keep Gloria Anzaldúa’s voice alive, and donate via Kickstarter by July 28th.