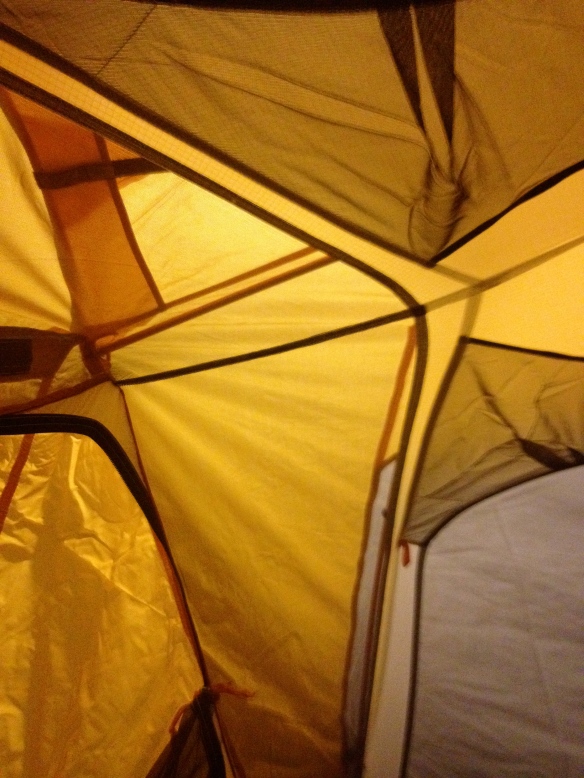 When I got home from my quick weekend in Chicago, I was a bit surprised to see an orange tent set up in our living room. Mike was so excited to tell me all about it: how lightweight it is (3 pounds!), how it’s great for backpacking, how it’s got a rain fly and he’s excited to make oatmeal under it in the mornings if it’s raining. Lots of conversation about the possibilities of rain with this tent – apparently the rain fly can be put up before you build the body of the tent so that in case of inclement weather you don’t risk getting your tent soaked while you mess with the poles and rain fly. I think that’s marvelous.

We had to take the tent down because someone with sharp claws was just as excited as Mike about the new tent. Carlos kept sneaking around the tent, trying to get in through the flap. I’d see a swish of black tail as he got in, only to run out moments later when Mike caught him. Then I’d see the little black face sniffing around the bottom of the tent. Not wanting to have to buy a new tent due to slash-holes caused by my cat son and his nasty habit of relentless investigation, the tent was packed away. However, I did enjoy sitting inside a tent inside my living room. It brought back childhood memories of Mike and I camping in the backyard.

(This is one of my favorite pictures of us ever.)

I so love the fact that I came home to a tent. I so love that my roommate is my brother. I love that we are nearly exact opposites. Mike’s idea of fun is a week spent fishing and hiking and backpacking. That’s my idea of perfect hell. My idea of fun is dancing, or the library, or four hours in a bathtub with books, or drinking wine. I do believe that those may constitute Mike’s perfect hell. 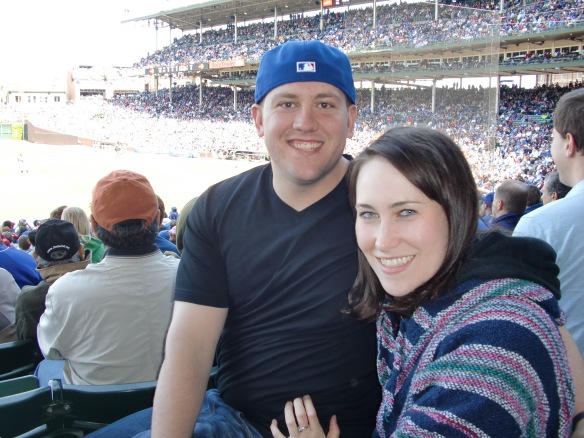 However, give that kid some sports, and you’re all set. I really like going to games with Mike. I always learn something and I always have fun. Above, my first Cubs game ever after I graduated from college.

He’s the athletic one. I mean, he’s 6’4″ and I’m barely 5’8″. He does the heavy lifting; he opens jars; he reaches things on the top shelf. He’s the one that’s good at math (damn good). He does the detail work. He’s focused, calm, patient, way too laid-back for his own good, kindhearted, organized, neat. He’s analytical and observant. He loves his outdoor activities, but my idea of outdoor activities involves drinking in a park. He cooks, too. He’s going to be a great dad and make some lady who can’t cook very happy one day. 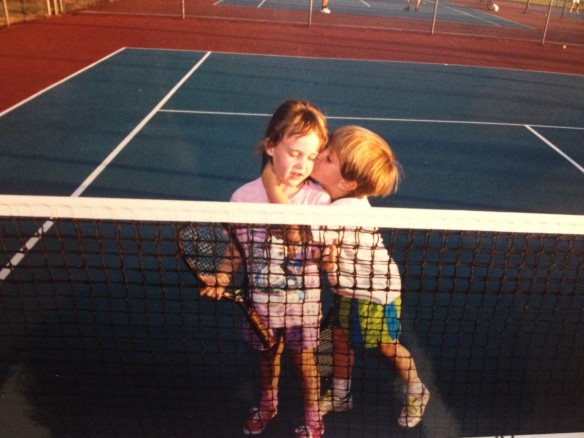 I’m the impulsive, energetic one. I’m loud and quite outspoken. I’m the one who thinks about the big picture, who takes care of administrative detail like paying the bills, and who is wound up 99.99% of the time. I am in no way patient or detail oriented, and I’ll never be accused of being organized or neat. And I can’t cook to save my life. (Baby steps, I keep telling myself. Noodles and sauce from a jar is totally food.)

Even though we’re not biological siblings, we’re a matched set. We make a really good team. We balance each other out. I’m impressed by his dedication to his schoolwork, fascinated by his love of strange things like his panini maker, and excited about our mutual enjoyment of tea. He knows how to calm me down when I’m stressed; he’s wise beyond his years.

We get each other. We used to climb the apple tree in the backyard together. We used to throw tennis balls at the house. When we were little, we thought it’d be the best idea ever to take out the hall closet that separated our rooms and create one giant room that was full of everything fun. Or if we couldn’t have one giant room, we wanted a secret tunnel.

During nap time (which sucks when you’re 7 years old), we’d grab Mom’s exercise mat and use it to sled down the stairs. In the summer, we’d have cannonball contests – which I never won. We dug mud holes in the garden, took our bikes and scooters all over the neighborhood, stayed out late and played hide and seek….

When I went off to college, I had a rough time the first night. I’ve never been that good at hiding my emotions, and I’m prone to bouts of hysterical crying. And so, I cried. I cried, and I cried, and I cried. (It was pretty bad.) My mom and brother and uncle and cousin left me all alone in Chicago (which would turn out to be one of the best adventures of my life, so in hindsight, no complaints). No one would have ever known about this if my uncle hadn’t told us – I’m glad he did – but apparently, Mike cried through Illinois on the way back to Denver.

My brother is one of the most amazing people I know. I’m so lucky that he’s mine. (Don’t tell him that – I don’t want it to go to his head.) I am so grateful.