I’ve left so many times, for so many reasons, and every single time, I end up back in Chicago, staring longingly at the lake. It was the lake that brought me there, after all. This weekend was a lot like the weekend that I spent out there in July, but this weekend was so much better.

Last week, when I told my boss that I was headed to Chicago for the weekend, he looked at me and said, “Your flight’s on Sunday night, right?” I paused. “Um….no….Monday morning, actually.” He looked at me and laughed. “I’ll see you on Tuesday,” he said.

(Remember the July trip? Waking up at 6:03 when my flight had taken off at 6:00….the long day spent laying on the couch while I killed time until my Monday night flight, a day of work lost, a terribly abrupt goodbye, the uncertainty of it all.)

Leaving Denver after work on Friday is not the best way to go. But then again, weekends are short – you’ve got to make the best of them. I was almost too tired to be excited, but simultaneously terrified that I wouldn’t make my flight. Of course, i had to stop for gas and ended up giving my dinner to a homeless man.

Sitting in my car, filling Jell-O shot containers full of shampoo and soap, I reminded myself why I do things like this. The work-life balance, but more than that. Life, mostly. The most beautiful life is the one that will never make me wonder what could have been.

The TSA was puzzled by my Jell-O shot shampoo containers. They took the bag out and marveled (my words, not theirs) at it before finally letting it go. This was immediately after I had to take cash out of my bra to get through the body scanner. I believe Charlie Sheen put it best when he said, “Winning.”

I’m a Taurus. I’m a very stubborn woman. He picked me up and I was first-date nervous. (Honestly, we’ve only ever been on about 4 dates, give or take, so it’s not like my nerves are entirely unfounded.) He made me dinner while I wandered to find beer. I interrupted him giving me directions with, “I’ll figure it out,” and ended up walking an extra 4 blocks each way to 7-11 (Chicago 7-11’s are the best – no 3.2% beer there!).

I didn’t mind the walk. I love the city.

Saturday day was him working for a bit and me going to see my friend Anne. Then it was double-date concert night. I’m not a huge fan of dubstep – it sounds like robots dancing to me – but we went and saw Bassnectar at the Congress Theater. It was loud, crowded, and fun. Some girl stepped all over the side of my heel though (until this happened, I wasn’t aware that it was possible to step on the side of a heel, all the way up to the ankle), which has left me bruised and grumpy. His brother and his girlfriend are great! We made brunch on Sunday morning, and I watched Back to the Future for the first time, curled up on the couch under a Cubs blanket.

Not our best picture, but the only one I have!

I felt old for the first time. I know I was not the oldest person at the concert (by far), but I felt somehow removed from the crowd. My dress and sweater made me look like a librarian (no offense, Maddie, just making generalizations) compared to the neon halter tops and short shorts all around me. I don’t do this sort of dancing and I was entirely out of my element. By the end of the concert, I was tired of getting danced into. I was tired of dancing (that so very rarely happens) and I was tired of hearing sounds. I had so much fun, and I adore his brother and his brother’s girlfriend, but I don’t know that I’d be so willing to attend a repeat of that event. I’m glad that he understood.

On Sunday, after a quick visit to his grandparents, we had dinner at his mom’s house. Last July, one too many “princess party drinks” (White Russians) had me doing some pathetic-late-night-love-drunk crying on his porch once we got home. His impression of that incident is nearly accurate and is hilarious – ask him to do it some time. (It’s just like the “I’ll go to DU, I swear” freshman year of college pleading, except two notches less hysterical. Maybe.) This time, I was (quite willingly) banned from drinking any. I would like to insert the fact that I’m also a lot more confident about his communication skills and where we stand, which is conducive to a no-tears environment.
His mom pulled him outside to tell him that I was too skinny before she made me eat second helpings on pasta and finish my giant hamburger. Then she walked me through making cookies from scratch.  “Beat the shit out of the butter,” she told me, after I’d failed to beat it quite fluffy enough. “Just set it on high, and walk away. Don’t watch it. Come back in five minutes.” It was terrifying, but so rewarding. I made something!!
I love his family. They’re so much like mine, sort of. Except his is definitely a little bit louder. Imagine four kids instead of me and Mike – it’s like that. It’s loud and chaotic and I feel right at home. His dad’s roommate, who I adore, came to dinner, too. We played Catchphrase, girls against boys, after dinner. The girls won quite soundly. It was the perfect ending to the trip. 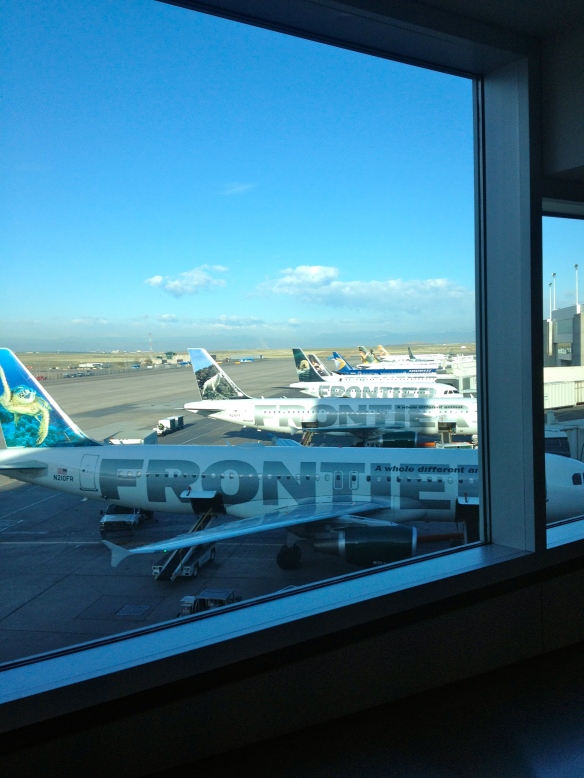 This time there were no tears. There was only the promise of “next time” – we’ll spend more time with his grandparents, we’ll cook again with his mom, we’ll get to see each other sooner rather than later.
This time felt good. I don’t know if it will be good forever, but for right now, it’s good, and I’m learning to accept those good things and stop waiting for the other shoe to drop. Because in time, it will.
This time, we woke up at an ungodly hour and crept through the sleeping city toward the airport. I was too tired to think about crying. He stopped the car in the second lane, using a giant, hulking van as a reason to do it (it is Chicago after all, most things go) and came around and wrapped me in his arms. There were whispers, quick conversation as he got back into the driver’s seat and I grabbed my bags. I shut the door and turned away. I didn’t look back, not even for one last glimpse as he drove away. I never look back. My smooth exit was marred only by the automatic door not working. I walked up to, so close I could have rubbed my nose against it, only to curse quite loudly when it failed to open. The automatic door marked exit was much more accommodating, and soon enough, I was standing in the long line to get through security.
Home sweet home and early for work! It was a very successful Monday morning.