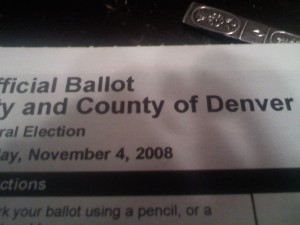 I know you’re not supposed to tell people who you voted for. I get that. But I am so excited to have voted for the first time in a presidential election that I can’t contain the news. As if you weren’t sure who I voted for: 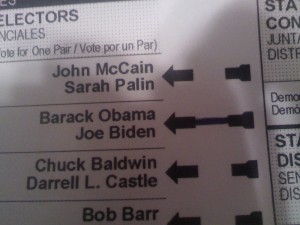 I hope you voted, no matter who you voted for.
One student from Mullen, who I never actually spoke with but is a Facebook friend of mine, noticed that my status was GO OBAMA!! and then proceeded to comment that: Barack Hussein Obama is a terrorist. You should be ashamed of yourself.

I will say that I wasn’t very happy with that at all. I responded politely, telling him that he shouldn’t question the beliefs of someone he doesn’t even know and that perhaps he might check his facts, please.
Ignorance is really annoying.
Some of my friends are for McCain. I appreciate that. I accept their decisions, so as long as they don’t sit there and lecture me and spit incorrect facts at me. I don’t sit there and tell them untruths about their choice.

Either way, there is a buzz around the city. Tonight, I’ll be leaving class and heading downtown to a packed and very excited city. We’ll see how it goes. I’ll get to sit with my friends and watch as history is decided (hopefully in our favor).
Wish me luck! I will tell you that if McCain wins, there will be riots in the streets here. Even if Obama wins, there will be wild celebrations. I don’t have my camera, but I might end up buying a disposable just to be able to record all of this. It’s a once in a lifetime opportunity and I get to be here!

EDIT:
You know I love any excuse to skip class, so when Emily asked me to go vote with her, I immediately passed up Logic for the chance. And so we went to St. Ignatius, the church that the boys use as a landmark to get to our place without getting lost, calling it the Ghostbuster’s building, and she voted. For the very first time. And we watched as they fed the ballot into the machine, and the number rolled over. Precinct 27, Ward 40, Chicago, Illinois had gotten its 233 vote.
And you know what 33 means….good news!

CNN was saying that Colorado was most likely going to go to Obama! Suck on that, Republicans! We haven’t been a blue state since the 1996 election!