It has most certainly been a very eventful week. And not necessarily in a good way. It’s frustrating, because I subscribe to the “put good out into the world, get good back” philosophy. Usually, I seem to maintain a pretty level relationship with the rest of the universe.

Lately, that’s been a seemingly impossible task. This is odd – Mercury isn’t in retrograde; there isn’t a full moon; I’m not in any way overwhelmed by floods of strange hormones. It’s just like all of a sudden, my luck has run out.

Remember that Disney channel original movie, The Luck of the Irish? We got cable when my parents divorced, so I spent most of middle school totally obsessed with the Disney channel while trying to sneak views of MTV when no one knew I was looking – that was when TRL was cool and Eminem was upsetting middle-class parents across America. I can probably still spit most lines from a few of his albums. (Oh god, I didn’t just type that. Mostly, I wrote that because “rap” sounded crass and I believe I’m unqualified. But perhaps “spitting lines” implies a level of rap battle preparedness that I’ll never achieve? Because honestly, any amount of rap battle preparedness is more rap battle preparedness than I’ll ever have.)

I mean, maybe I’ve been looking at the situation all wrong: I do have elf-like features and I’m most likely at least part Irish, maybe I’m just a leprechaun. Perhaps this spell of bad luck is just because an evil Irish-dancing leprechaun has made off with my luck, and all I have to do to get it back is beat him in a basketball game (giving real meaning to “March Madness”). But in that case – losing – I’d probably have to spend the rest of my life without my luck (my jump shot is a tad rusty). 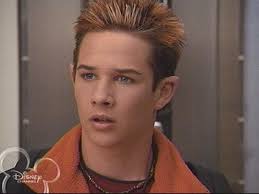 and whatever force is currently harshing my buzz (on life) is this guy:

I mean, there are definitely some silver linings to some of the stuff that’s been going on in the form of compassionate souls, understanding, lessons learned, and general introspection, but on the whole, I am making a mess of everything I touch. Life in general is crumbling around me, all of a sudden. It’s like dominoes. It’s like straws on a camel’s back. It’s like floodgates. Pick your metaphor, whichever is the most disastrous. One thing fell, and everything is tumbling down.

So here I am, trying to weather the storm. (Hah, apparently I’m going for broke on the terrible metaphors today.) Here’s hoping that things calm down and go back to normal soon – I’m ready to go back to the stasis of optimism. This pessimistic peering at the bottom of things is really getting me down. Here’s to a swift return of my luck, of my hope, and of normal.

(Images stolen from the internet – they should link back to their original source.)