Chicago is one of those strange places where cultures mingle quite happily but there’s also a prevailing sense of deep separation between different classes and races.

I don’t know the truth about what happened here, but it does seem a little bit fishy. Chicago doesn’t have the best reputation as a city that upholds human rights, particularly when the defendant is black.

(My personal opinion is that the CPD is not actually working to help you as a resident, they’re working to help themselves. I lived in fear of my own precinct for a brief period of time during my senior year of college after reporting the actions of a Sergeant in an attempt to file a simple police report.)

MARY MITCHELL: Chicago has its own Trayvon Martin-like scandal

Howard Morgan was hospitalized in 2005 after allegedly being shot by the Chicago police. | Courtesy ABC7 Chicago

At a time when the shooting in Florida of Trayvon Martin is drawing supporters from across the country, Chicago has its own shooting scandal.

Like the Trayvon case, nothing about the 2005 shooting of Howard Morgan makes sense. Chicago police officers shot Morgan 28 times during an alleged traffic stop. However, it was Morgan who was charged with attempted murder, among other offenses.

But unlike the Trayvon case, Morgan’s wife and supporters have had a difficult time getting the media to pay attention to the case even though it involved a volatile mixture of cops and race.

Morgan is African-American. All of the police officers involved in the shooting are white.

“This man is the only man in the world who was shot 28 times and still alive to tell the truth about what happened,” Rosalind Morgan told me during a telephone interview on Monday. “This is crazy. There’s been a news blackout. I had to go outside to get someone to help.”

After a second trial, Morgan was convicted of attempted murder and is scheduled to be sentenced at 26th and California at 8 a.m. Thursday amid protests that the second trial amounted to double jeopardy.

“He should have been acquitted of the remaining charges,” Rosalind Morgan argued. “His constitutional rights were violated. He did not have a fair trial.”

Occupy Chicago protesters are planning to demonstrate in front of the Cook County Courthouse Thursday, although uniformed police officers are expected to pack the courtroom. Morgan faces up to 80 years in prison.

Morgan, a former Chicago police officer, was working as a policeman for the Burlington Northern Santa Fe Line in 2005 when he was shot 28 times by four white police officers during a traffic stop.

Although the police officers alleged Morgan opened fire when they tried to arrest him, the fusillade of bullets turned Morgan a human sieve and put him in the hospital for seven months.

Morgan languished in jail until an anonymous donor put up the $2 million bond.

In 2007, a jury acquitted Morgan of aggravated battery and discharging a weapon at a police officer. They deadlocked on attempted murder charges.

Prosecutors retried the case and in January, and a second jury found Morgan guilty on the attempted murder counts. Morgan’s supporters argue that the verdict subjected him to double jeopardy because he was acquitted in the first trial of discharging a weapon.

“It’s just wrong. They want to sweep this under the carpet and don’t want to take the blame,” the wife said.

“All of the young people who were victims of police shootings are dead. They can’t tell their side of the story. Mr. Morgan was shot 28 times — 21 in the back of his body and seven times in the front. The man deserves to be treated fairly,” she said.

This controversial police shooting occurred around the same time the cover was being pulled on police torture and corruption in Chicago.

Yet similar to the public’s initial nonchalance with respect to the Jon Burge torture victims, the Morgan case hasn’t sparked any protests.

“None of the big ministers have gotten involved. Jesse Jackson hasn’t stepped in,” Morgan told me.

I caught up to Jackson in Memphis where he is taking part in observances marking the anniversary of the assassination of Martin Luther King Jr. Jackson’s been all over the Trayvon Martin shooting. But he agreed that it has been difficult for the public to sustain outrage over the Morgan shooting.

“When he first got shot, we visited him in the hospital,” Jackson said. “After the first trial, we thought we won the case, but this has gone up and down. We intend to go to court with him on April 5th, and a number of our people intend to be in the courtroom,” he said.

“This [police involved shootings] is pervasive.”

Meanwhile, the Morgans are pursuing a civil suit in federal court against the police officers.

As much of the country follows the Trayvon Martin case, activists in Chicago are hoping to bring some of that attention to Howard Morgan, a former Chicago police officer who was shot 28 times by white officers — and lived to tell his side of the story.

Morgan was off-duty as a detective for the Burlington Northern Santa Fe railroad when he was pulled over for driving the wrong way on a one-way street on Feb 21, 2005, the Chicago Sun-Times reports. While both police and Morgan agree on that much, what happened next is a mystery.

According to police, Morgan opened fire with his service weapon when officers tried to arrest him, which caused them to shoot him 28 times. His family, however, very much doubts those claims.

“Four white officers and one black Burlington Northern Santa Fe Railroad police man with his weapon on him — around the corner from our home — and he just decided to go crazy? No. That’s ludicrous,” Morgan’s wife, Rosalind Morgan, told the Sun-Times.

She was not the only person to doubt CPD’s side of the story. A Change.org petitionsigned by more than 2,600 people called for all charges against Morgan to be dropped, and now Occupy Chicago is getting involved.

“After being left for dead, he survived and was then charged with attempted murder of the four white officers who brutalized him,” Occupy wrote on their website, adding that Morgan was found not guilty on three counts, including discharging his weapon. The same jury that cleared him of opening fire on the officers, however, deadlocked on a charge of attempted murder — and another jury found him guilty in January.

That jury was not allowed to hear that Morgan had been acquitted of the other charges.

Protesters and Morgan’s family say the second trial amounted to double jeopardy, and claim officers have gone to great lengths to obstruct justice in the case:

Howard Morgan’s van was crushed and destroyed without notice or cause before any forensic investigation could be done….

Howard Morgan was never tested for gun residue to confirm if he even fired a weapon on the morning in question.

The State never produced the actual bullet proof vest worn by one of the officers who claimed to have allegedly taken a shot directly into the vest on the morning in question. The State only produced a replica.

“If they can do this and eliminate double jeopardy and your constitutional rights, then my God, I fear for every Afro-American — whether they be male or female — in this corrupt unjust system,” Morgan’s wife told the Sun-Times.

Howard Morgan will be sentenced Thursday. He faces 80 years in prison. 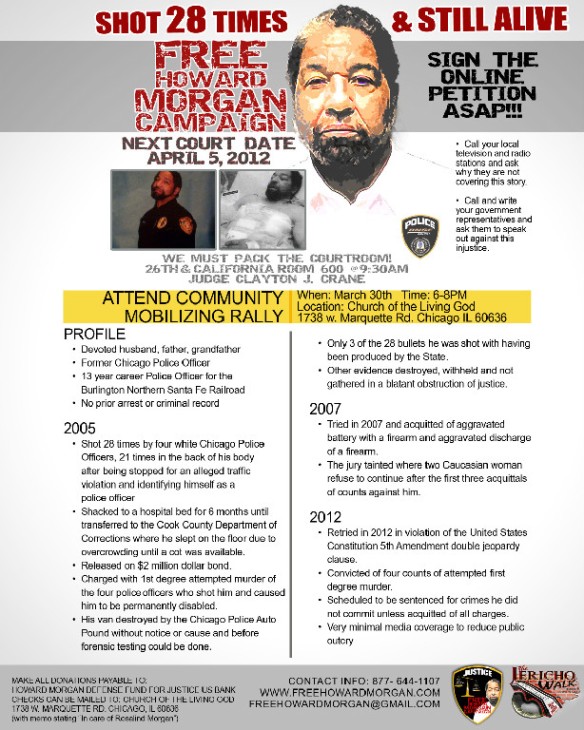