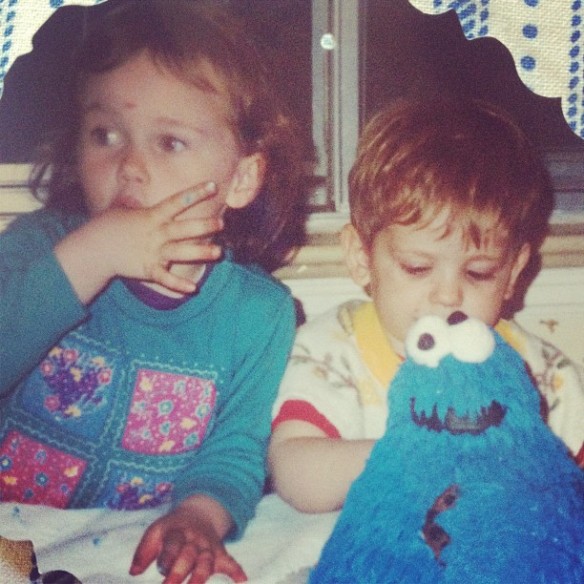 I think this was Mike’s birthday cake?  If you don’t mind my saying so, we were just adorable.

I love that in most pictures, I’m either moving or talking. Apparently my inability to sit still isn’t new (and neither is my love of cake).

I love finding old pictures. This one was pinned to my wall in my room at my mom’s house.

I love that my room at her house is a frozen snapshot of my adolescence. Not quite frozen anymore, as it would later become the repository for all of my collegiate possessions and thus everything has commingled into a massive reminder of everything that is my past. Schoolbooks, shoes, pictures, artwork, dresses (oh, my dresses – they are all so amazing.)

There are posters on the wall. There are pictures of me and my friends, doing whatever it was that we thought worth photographing at those ages. I’ll pick one up and cringe at how silly I look, but they’re a nice reminder of how much I’ve grown and changed. They also remind me how grateful I am that I was so invested in my adolescence. We were so engaged in shedding our youth and so determined to don our adult selves, but we never lost sight of our enjoyment of everything “teenage.” We were silly and serious, immature while maturing. Honestly, it was rough, but it was beautiful.

I was talking to mom the other night about those rough years. She told me that her mantra during that time was This too shall pass, which makes me wince with regret and a touch of shame. She was quick to reassure me that it wasn’t all bad. (Great, just what everyone wants to hear. “It wasn’t ALL bad.”)

I was telling her about the mother and daughter that I saw checking into the hotel in New York. The daughter had the matronly look of a teenager who developed young but hasn’t yet grown into her body and the mother just looked frazzled. They were at the counter, asking the concierge a question, and I heard the daughter say, “I told you so!” to her mother in front of the concierge.

I apologized to my mom for basically all of my youth. In retrospect, I was a holy terror at certain moments and perfectly angelic at others, but I’m comforted by the knowledge that all of that is normal in the progression from infant to adult – the progression that is never easy and comes with no instruction manuals.

My relationship with my mother is a strong and honest one. I don’t lie to her (I try not to lie in general, but I’m particularly frank with her), and she doesn’t lie to me. I know that anything I do, she’ll support, and she’s always been available to listen. She doesn’t always like it, but she’ll listen. And I appreciate that. It’s the sort of unconditional love that makes me proud to be part of the family. They’re all very good at the unconditional love thing.

She admitted to me that she understands a lot of what was going on back then was caused by my dad, which I don’t deny. His approach to parenting a teenager may not have the best. (By “may not have been the best,” I mean “definitely wasn’t the best.”) It caused a lot of anguish for me and created a terrible emotional firestorm that, when combined with teenage hormones, was bound to create a series of terribly unfortunate and chaotic events. You’ll do well to note that since I was able to remove myself from the situation and embrace my independence, there has been a drastic increase in all things positive.

Growing up involves a lot of growing pains. Those precious babies do grow into perfect monsters and then pass into tentative adulthood. It’s never peaceful. Even after they leave the nest, there’s a lot of growing left to do. By that point, you can only hope that they have the tools necessary to deal with the hellish nature of adulthood and the grace to accept responsibility for all that they are and do. A sense of humor never hurts, either.