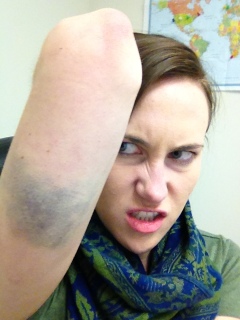 My arms looks really weird in this picture (it normally doesn’t look like a sad piece of sausage), but that’s the back of it – all purple and blue and green. Let’s just say I’m really grateful that I have a helmet for snowboarding; I’ve needed it quite a bit this year. After knocking the wind out of myself during a particularly nasty fall on Saturday, I sat on the mountain and cried a little bit. It was the first time I’ve cried while snowboarding; I felt like such a baby. I got back up, though, and kept going. My ribs are ever-present reminders that the human body is not invincible. Alas, by the end of the year, I am determined to be more than proficient in snowboarding. I want to be able to do black runs and go off little jumps. We’re getting there. (Slowly)
Best quote of Kevin’s all weekend was: “As long as I’m with you and you’re not crying, I’m having fun.” Emphasis on the “you’re not crying.” It made me laugh.
Where is my son? Oh, that’s right, he’s still hanging out at Kevin’s. Apparently, the two of them are quite a nice pair. Carlos loves all of the nooks to crawl into and all of the stuff to climb on. He also seems to adore Kevin. I’m happy that they get along so well.
Dear Mullen High School Board of Trustees,
The lack of sound leadership on the part of Mr. Ryan Clement, President and CEO, and Jim Gmelich, Principal as it relates to the firing of Coach Dave Logan and his staff have hurt our Mullen students, alumni, parents, faculty, and friends. The character and dedication of Coach Logan and his staff are without question. The number of young people they have positively influenced is tremendous. The actions of Mr. Clement and Mr. Gmelich do not uphold our LaSallian values in how our Mullen family is expected to be treated.
We petition the Board of Trustees of Mullen High School to act immediately to remove Ryan Clement and Jim Gmelich from their respective positions, and to move immediately to reinstate Coach Logan and his entire staff.

As I type this, 750 people have signed the Mullen petition (text above). I know some of them. I’ve been reading the comments – of course they’re biased, but they are very telling about how Mullen has handled the last few years. As a member of the class of 2006, I am proud of the education I received, but I can honestly say that I’ve not heard any positive news coming out of Mullen since I left. While I know that a lot of people think that there must have been some grievous offense committed by Dave Logan prior to his firing, I am not necessarily ready to believe that. I’m also not supportive of this current administration. I am saddened that the attempts to revive Mullen have resulted in the utter destruction of its reputation.