The library reminds me of childhood, of feeling safe and content, of feeling endless possibilities.
I  love books.
I love taking books home with me.
I do not love the fines I tend to incur when I fail to return those loved (and lost, infinitely misplaced) books. 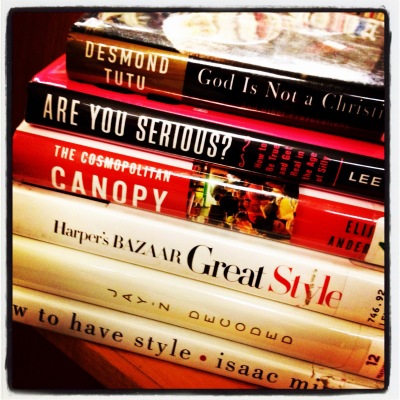 I nervously handed the librarian my driver’s license, clutching a torn envelope with my address on it just in case. He informed me that I wasn’t in the system – thank god they don’t remember me – and then told me to apply for a new card.
Five minutes later, I had a brand new library card in my hand.
It was honestly hard to contain my excitement. I wanted to just open the first book I could see and breathe in its bookish smell.
(I didn’t. I have realized that perhaps smelling books that have been touched by the population of any city may not be the best of ideas.)
At one point, I had eight books in my arms.
E and I wandered through the stacks, picking and choosing and chatting.
I will not be able to aptly describe the feeling of contentment that flooded my soul.
I pared my choices down to six.
Desmond Tutu didn’t make it.
(He was replaced with a romance novel, but shhh, don’t tell him that.)

Saturday, K (oh dear – now I have two K’s; this may get tangled) and I went Halloween costume shopping. I needed a tutu and he needed everything. After we stopped at a vintage store, we saw a ton of cop cars headed toward Occupy Denver, and since he’d never been, we went to have a look. I tried to explain it all to him, but realized that it’s a lot harder to encapsulate concisely now that everything seems to have fallen apart. 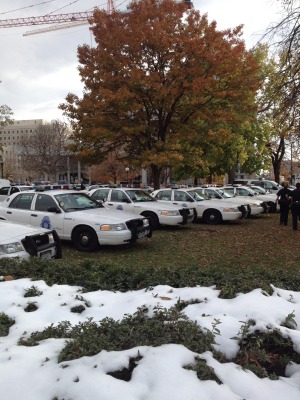 On some level, I still agree with the protesters. I see that the greed of our economic policies, leaders, bankers, etc. has gone overboard. 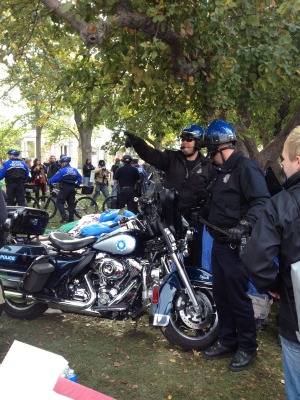 But I also don’t see why you’d endanger your health to sleep outside in the snow or why you’d risk arrest just you could disrespect a police officer. Things have shifted drastically in recent days, and I’m finding myself more and more removed from the movement. I no longer think the people protesting are so adamant about their beliefs and goals, and instead, seem to have let a variety of distractions get in their way. 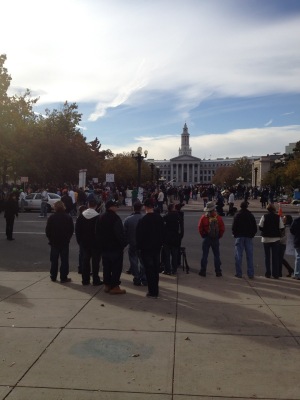 That, and hearing that there’s been conflicts with the police that were instigated by protesters, is slightly off-putting. There’s no need for violence and there’s certainly no need for violence against the people who are supposed to protect you. Granted, the police may not always react appropriately or respectfully, but they need to know that they at least have the respect of the protesters. Otherwise, something violent will happen that could seriously endanger lives.