Katie has been my best friend since my first day of high school. She was the first person to say hi to me in the hall, and I thought she was a cool kid. I was wrong. (Not that she’s not a cool kid, but she wasn’t a “cool kid,” if that makes any sense. It does to me, probably because it is one of the most vivid memories I’ve retained in my fourteen year old mind.)
I love her. This sounds ridiculous, but being with her has shown me the true depth of love. I will never settle for a man who doesn’t sometimes give me butterflies like she does. It’s old and new and never boring.
I went up to Fort Collins last night to see her before I leave for Cape Town. I love the atmosphere of Fort Collins; it’s such a funny place but it’s so comfortable. Her house is always the same, and I’m always leaving stuff there or forgetting stuf but it’s never an issue.

We went out and were soon approached by a lone man. He offered us drinks. We spent a good few minutes scouting out his position at the bar to check for drug-slippage. There was none, but you never can be too sure. We made him switch all the drinks around, which he was glad to do. We drank them and then thanked him and invited him to sit down.
He did. He and Katie hit it off and started talking, playing the question game. One would ask a question, we’d all have to answer, then someone else would ask a question. It went on. Eventually, to his apparent chagrin, his friends came over. Seeing that Katie was in the mood to continue the conversation, I spent the rest of the evening allowing the rest of the guys to sit and talk. Allowing is a strong word. I ran them in circles.
It’s rare that you find an honest man. It’s even more rare to find an honest man in a bar.
The three guys that made up the main entertainment for the evening were funny, charming, slightly awkward, but genuine. And that means a lot.

It’s rare that a man gives you an honest compliment. At some point, there were two interlopers attempting to gain entry to our odd circle. One went the eye route. “Stunning eyes, you’ve got a Halle Berry thing going on…” and so on. Katie would later refer to him as “Jersey Shore over there.” I excused myself for a moment of air and the relative peace of the man-free women’s restroom and upon my return, they had left. The two friends of the original guy were quick to say that they didn’t like the way the guy had been talking to me. That protectiveness was quite unnecessary, but wholly welcomed.
One of them was surprised to find out that I am twenty two. “You carry yourself like you’re older,” he said. He extended it to include my intelligence and told me he was impressed by the upcoming South Africa adventure. “It looks like you’ve got your head on straight,” he said. I crossed my fingers and smiled.

It may not have been honest flattery but it certainly made for a comfortable evening full of fast-paced conversation with people who weren’t aware of the idea of the end game. I was also told I looked like I could hold my own in a bar fight, which is definitely not true but a sweet sentiment.
And Katie got asked to dinner.

Like, a legitimate dinner date. Something that hasn’t been seen in the Ft. Collins area since early 2003.
See? Sometimes being the wingman does have serious perks. 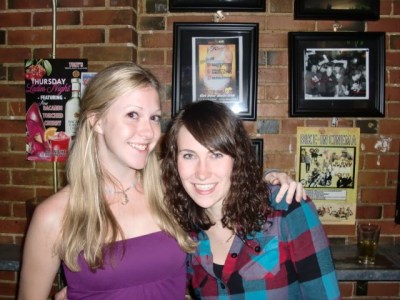