The bar crawl benefitting the Chicago Children’s Hospital was a wild success. Madeline and I drew on mustaches with liquid eyeliner. Hers was small and possibly French and mine was a wild handlebar-curved-sort-of-ordeal. 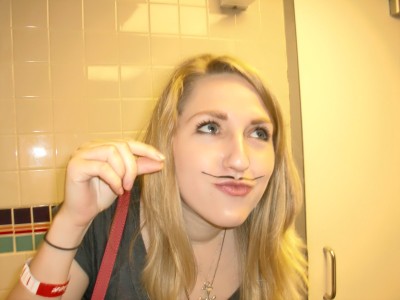 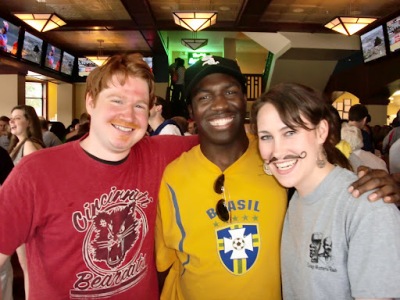 We had a great time. Our friend Patrick brought his friend Duane and we went around to the bars. It was crowded, and we were glad that we’d been able to bring side beers with us. It definitely softened the financial blow and allowed us to add a little bit more, uh, refreshment to our afternoon. We made it through about half the ones on the list before we were sidetracked by a group of Irish/other people we met. And that’s where things got interesting.
Maddie walked off to go the bathroom and I didn’t see her for the rest of the night. She was on her way to get a cheeseburger when she decided to head home. (I heard from her, though, don’t think I’d ever let her just walk away unattended.) I stayed with the boys and we stayed with our new friends, abandoning the bar crawl for pitchers at a bar next to Wrigley, or “the cubs stadium,” as the Irish tweeted from my phone.
Somehow, we ended up on the train and then a bus and then the South Side on our way to a party,  which was not a great plan in that I was not as patient as I could have been, so we ended up heading back up north. I came out of yesterday with a twelve-pack of Bud Light that some guy bought and then left, so I feel like it was a success.
Today was understandably a very relaxed day. I lounged. I made sun tea. I ate strawberries. I drank Vitamin Water. I snuggled the cat.
Tonight, Maddie and I are ordering Chinese food and watching the MTV movie awards because a comedian that we love, Aziz Ansari, is hosting.
Expect a post about teen pregnancy at some point soon. (Obviously not my own teen pregnancy….but teen pregnancy in general.)