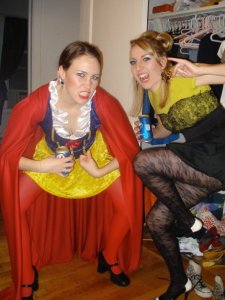 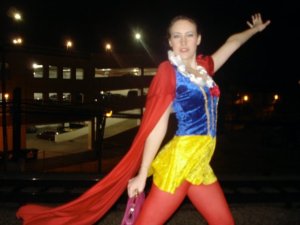 Enter November. This was a very socially productive weekend, although one that saw nothing school or life related accomplished.
Maddie and I went out on Friday night. I dressed as Snow White and she as musician Lady Gaga. (She made a bow on her head made entirely out of her own hair. It was an impressive feat.) We went to the bars near Wrigley Field and ended up meeting up with Hunter, his friend Brian and Trif.
That was definitely the wildest night of the week; we ended up meeting some absolutely crazy people.
Saturday, I was sort of all partied out, but dressed up as a black widow. (You’ll note it’s the same dress from last Halloween. That was $12 well spent.) We went to a house party, but it was literally so packed you couldn’t move. So we ended up back at my house.
Today, I have a migraine and am parked on the couch.
Bad news: camera isn’t working correctly. Good news: still under warranty. I will call them this week and hopefully get it fixed. If not, I need to find my Costco card so that I can return it.
Either way, not so great news. But on the plus side, I have not lost it or done anything to damage it. I feel as though Halloween isn’t usually a good day for cameras. Freshman year, mine was stolen in a bar.

I’ve realized that the theme of most crime committed against me is theft.
-robbed at DQ
-bike
-camera
-computer
Those are pretty big ticket items. Lame.
Here’s to karma, because I know it’s real. Somewhere, some unlucky thief is getting everything they deserve.

The next two weeks are going to be rather hellish, but I need to accomplish a few goals.

-Graduate school applications
-Get Rome stuff ready (if it’s a go)
-Make an appointment with my guidance counselor—register for classes
-Figure out when all of my finals are so I can get Christmas tickets
-Write my bondage paper
-Pass speech class–I have a speech to give next week, unfortunately
-Do a general cleaning of car, home and room–get my life in order
and finally, and on an upbeat note,
-finish the novel I’ve been reading.

I hope you all had a wonderful Halloween. I look forward to getting to see everyone at Thanksgiving.

I was thrilled to be able to have two costumes and to only spend about $30 this year. I bought tights, a cape and a bouquet of black roses. The cape took up most of the budget, but I do believe that it will be a very viable piece for costumes throughout the rest of my life.

Also, once I am able to upload photos from my camera (it may be Thanksgiving) but….I was at the grocery store with Maddie and Hunter. I jokingly said, “Let’s steal some pumpkins.” It turns out that they were free. We loaded up my car with them and took them home and carved them. Mine is a sort of owl-ish looking creature. It’s surprisingly adorable. I put little candles in him last night and he was the centerpiece of my decorations.