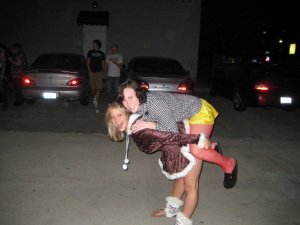 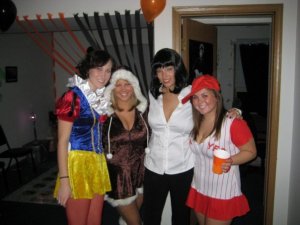 Saturday night was the pre-halloween party at Melissa’s friend Kaylie’s house at Illinois State University, which is a two hour car ride from Chicago. I dressed as Snow White and spent the better part of the night drifting between people that I knew, making the required small talk. I went outside, to talk to Danny for a little while and get some air, and then ended up having an actual conversation. Another party, another set of faces, and back again. It was enjoyable, but not overly stimulating.
I jumped on the trampoline at Melissa’s house today with her and Bobby and her 8 year old brother. That’s the one thing I was never allowed to have as a child, and the one thing I always wanted. Relaxing into the couch, curling up with football and a golden retriever, and a home-cooked meal. The drive back, eventually, and the weekend ended.
It’s back to the grind again.
The pictures: all of us at Kaylie’s; me and kaylie; melissa decided to give me a piggy back ride (at that point i had ditched my cute but painful shoes and slipped into my new favorites…..); Danny and I in Oregon, being young and in love.

Time melds as days turn into nights and then swiftly into days again. Lists and agendas pile up, good intentions never quite turned into actions. Clutter, so carefully attended to for such a long time, piles now, in places most awkward and obvious. THe desk, a dumping ground for paper products: receipts, art supplies, notebooks, textbooks that should have been opened nightly for the past two months. The floor, a collection of dirty laundry and clean, socks, mittens, a duffel bag, the Communist Manifesto. Pictures adorn the walls, models, friends, impressionists, photographs. There is no theme, no rhyme nor reason to the rooms. Now that fall is official, there are Halloween decorations, borrowed from parents whose lives are already set.
It is a question, hanging there, waiting to be answered.
It is the silence that follows, in the moments where one is unsure of what to say, or how to respond.
It is the deafening, the slow quiet in the room.
It is time to explode, to begin, to renew, to live.
She offended me, today, telling me I have nothing to worry about. I laughed it off then, standing at the check-in desk, waiting to let her into the building, but I wanted to tell her that sometimes things aren’t what they seem. Set into life, she has it easy. The endless stream of bills is constant. The mortgage payment doesn’t change. Her husband’s eyes don’t wander, her children are safe and happy. She has a career, a path, and I’d assume goals.
I stand on the edge of everything. Of staying, of leaving, of wanting to do what I love and loving to do what I want. I’m confused. I’m thrown and tossed a million different directions, caught between the two cities that I’ve grown to love and the people that I’ve become attached to. Every time someone says I’m too young, that I don’t know what I’m doing, I become more resolute. Life, to me at least, isn’t about doing what you should do, or what will lead to a standard life. I want to follow my heart, and if that leads me somewhere incorrect, then I’ll laugh about it, say I made a mistake and keep going. There are times I just want to run away from here, and not look back. I’d pack a duffel bag, taking Buddy and my Winnie the Pooh comforter that I just can’t get rid of, and some t-shirts and my clogs and just get away from here. I’d sell my books for plane tickets, and run to him and let him hold me against his shoulder and tell me everything will be alright. Or I’d run somewhere else, and get a job, or a little cottage by a lake somewhere, and spend hours working on the masterpiece that is daily edging itself into my brain. But not much, so don’t start holding your breath yet. I want to be happy. I want to experience everything. I want to move around and not settle down. Something happened in me this summer, a sort of yearning for comfort. I no longer want my heart to be broken in one of those heated arguments; I don’t want to be with someone just because I think I have to, that I need the practice. I want what I have, right now. It’s not that far-fetched of an idea, really. And today, for some reason, we decided, was going to be the day. 3 months, then, we are into this endeavor and I have not wavered in my opinion. If anything, it gets stronger every day. There is a connection there, the sort of thing that I never expected to find.
My clock has been blinking in a strange way, as though the power was turned off, since I got back from Oregon. And every night, I stare at it. I’m beginning to read it as though it was an actual clock. It’s only fifty minutes off, so I just sort of do the math in my mind. I don’t change it. I wonder how long it will take.
I’m consumed by thoughts of everything. Of worry for the safety of the one person I could never lose, of the success of the procedure people I don’t trust are about to embark on. I worry about him, always, just as much as he worries about me. I think about scenarios, I run them through my head. I play with the future, with ideas, places, people, life.
Australia, I think. Maybe.