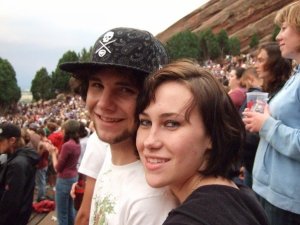 As we started saying goodbye, that day edged closer and closer. And then it was pushed off again, distant, and somehow the time started to slip faster. The last week, my last given days in Colorado, went so fast. There was the final show at Red Rocks, planned. There was the one on Wednesday that neither of us were expecting. Katie left last Saturday, and I do regret that I wasn’t able to get up to Ft. Collins to see her before I left.
I’m tired. Waking up Friday morning was difficult. The hours slipped by, and tears leaked out every now and then. Stupid things would set me off. He’d tell me he loved me, and I’d lose it. And I thought that nothing could get worse until today. Because it actually hurts. The space where my heart was hurts. My legs, my head, my arms, my back. I am lovesick. The smile was stuck on my face all yesterday. We sat at Stella’s. Our first place and our last, memories sliding easily between us. I think of the first night we hung out, the first inside joke. And it kills me. Because I know that no one believes in this. Not many people support our decision to try and stick it out. I’ve heard the typical “You need to keep your options open.” or “Long distance? You’re so young.” It doesn’t matter. Maybe it’s because I’m young that I’m open to the possibility of love in the tougher places. I don’t know. I’m following what I feel, and I’m usually not wrong.
I miss my mountains. I miss the sunset. I miss Danny.
This may be the beginning of my last semester at Loyola. Either that, or I will finish out the year. But I am keeping other possibilities open, only because I feel that one should not approach higher education with dread. I purely dread going back to my apartment. I dread going to class. I dread eating alone. I dread having to spend Friday and Saturday nights curled up in bed with a book (although for an extended period of time, I would be alright.) I just can’t live without my friends. And to those of you who believe in “sticking it out,” I’d like to point out that someone like myself, who is shy and has difficulty making friends, has no chance in a place where I do not feel comfortable.
That’s that. And I’m going to be happy, whether it’s in Chicago, or Denver, or Tahiti, or wherever.
I get pissy when I’m tired. That’s a known fact. This morning, I got held up at security because the man in front of me was excited to get to flash his Arapaho County Sheriff’s Office badge, and talk about how he had a knife with him. …Power trips annoy me. We get to our gate, way down the A concourse, and of course, he was on the phone, talking loud enough for the entire waiting area to hear. I was not going to sit around and listen to it, and I know that neither was anyone else. I watched people look at him, and he sat there, oblivious. So I got up. And I called him out for being too loud. At five in the morning. I was very nice about it, and I threw in a nice little hand gesture in case he had any doubts as to my meaning. I lowered my hand as though it was a volume guage, and apparently my mom got a thumbs up from some guy who was watching me do all of this.
we’ll talk about the room, the roommates…all of that. later.
Advertisement